What is the difference between a thread rolling machine and a threading machine?

Threading and thread rolling machines are tools for thread processing. The former is to remove the parent material to form a thread, and the latter is to extrude the parent material. There are two types of reinforced joints for on-site construction: one is overlap, which can be tied with iron wires and used in beams that are not very heavy; the other is butt, which is connected by welding and used to support gravity Inside the pillar. The two machines mentioned above have little to do with reinforced concrete construction.

The thread rolling machine is a multifunctional cold extrusion forming machine. The high speed thread rolling machine can perform thread, straight and diagonal rolling on the workpiece in the cold state within its rolling pressure range. Rolling; straightening, reducing diameter, rolling and various forming rolling. The machine has a safe and reliable electric-hydraulic execution and control system, which can make each work cycle choose from three methods: manual, semi-automatic and automatic.

The rolling cold rolling technology is an advanced non-cutting process, which can effectively improve the internal and surface quality of the workpiece. The radial compressive stress generated during processing can significantly improve the fatigue strength and torsional strength of the workpiece. It is a highly efficient , Energy saving, low consumption ideal process. 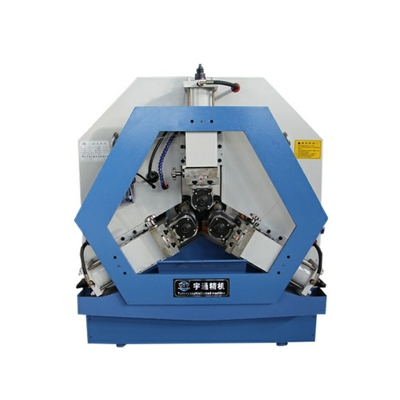 The thread rolling machine is used in a large amount in the current construction industry. You may understand the usual routine operations. But do you know about the tool change of the thread rolling machine? If there is a problem with the tool, it cannot be hardened, and it must be replaced in time to avoid damage to other parts. If there is a crack in the rib peeling blade, it must be replaced with a new blade in time. If it is not replaced, continued use will damage the machine and the workpiece. And in the process of changing the new knife, the washer of the pitch should be adjusted according to the regulations. If the flat die thread rolling machine is not adjusted, it will not run normally.

In addition to the rib stripping blades to be maintained, the thread rolling shaft wheel should also pay more attention to. The long-term grinding of the workpiece is also a kind of chronic wear on the shaft wheel. If it is often ignored, the wear of the axle wheel will only get worse and worse, and only new axle wheel molds can be purchased in the end, which will cost a lot of money. However, if the periodic maintenance is interrupted, the wear of the axle wheel will certainly not be so serious, and it will still be restored. So the normal operating rules should be: regular maintenance! In this way, even if it is necessary to change the axle wheel in the end, it will take much longer than no maintenance! The use of the thread rolling machine can not only rely on its good quality. Whether it can be used for a long time or not is whether the operation is standardized and the maintenance is in place!