Precautions in the Use of Thread Rolling Machine

Main structure, performance and characteristics of automatic thread rolling machine: The two main shafts of this automatic thread rolling machine are synchronized and rotated in the same direction. The movable main shaft is driven by hydraulic pressure for horizontal feed motion. Spindle hydraulic workpiece to make it into the required thread and other shapes. This machine is mainly composed of frame, transmission box, fixed headstock, movable headstock, tailstock hydraulic system and electrical parts.

The application space of thread rolling machine products has been gradually expanded with the increasing demand for human quality of life. It has shifted from the traditional fields such as architecture, road construction, water conservancy, electricity and mining to agricultural construction in narrow cities and mountainous areas Places and warehouses, docks, warehouses, cabins, farmhouses, gardens, horticulture, building floors and underground engineering operating environments. Through the informationization and intelligence of the thread rolling machine, self-diagnosis and Repair ability, reduce the labor intensity of construction personnel, improve work efficiency and project quality. Under some special working conditions, such as high temperature, severe cold, high altitude, radiation, underwater and underground conditions, it can replace the construction personnel for intelligent and high-quality construction. The automation control and remote control of the operating system, precise positioning and control of construction, fault diagnosis and monitoring and other technologies will be more and more widely used in thread rolling machines. 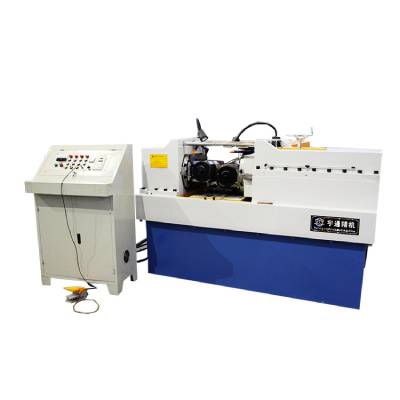 1.The rolling machine has poor accuracy, large vibration and service under abnormal operation;

2. The alignment of the rolling die is not correct, the rolled part undergoes axial displacement, and the tooth pattern is subjected to two stresses: shear and compression;

3. The size of the rolled thread blank is uneven, the surface is not cleaned, and there are grinding wheel foam, oxide scale and dirt;

4, uneven hardness of the rolled parts (8.8 bolts should be 27 ~ 30HRC; 10.9 grades should be 35 ~ 37HRC), to prevent sometimes poorly managed hardened parts with high hardness (50 ~ 55HRC) from being mixed due to poor management In the tempered part, its hardness is similar to the hardness of the toothing edge of the thread rolling wheel, resulting in chipping.

6. The rolling wheel must be fully demagnetized before leaving the factory. Residual magnetism is left. The fine iron foam adsorbed by the tooth pattern will accelerate wear and tear during work.