How To Choose a Cost-Effective Thread Rolling Machine

Rebar clamping is accomplished by using a forward and reverse threaded screw to drive the clamping pliers to slide and self-center.

When the main motor button is turned on, the motor drives the reducer and the rib stripping head to rotate. The operator moves the handle to feed. When the thread processing is completed, the travel switch contact plate presses the travel switch button. Automatic shutdown. 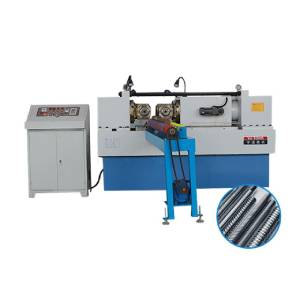 The features of this model are as follows:

① Fully-automatic straight thread rolling machine is a newly developed multi-function thread rolling lathe, which can roll the profile angle 75. The thread can also be rolled at any angle, just need to change the thread roller.

③ Reasonable design, easy to use and maintain, it only takes 2 minutes to change tools.

④ The cutter adopts automatic opening and closing structure, and the steel bar is clamped at one time, and the wire head processing is completed in 30 seconds, with high efficiency.

⑤ The wire rolling cold rolling process is adopted, and the steel wire head is processed into a "mold" with high accuracy and a 100% pass rate.

⑥ The operation is convenient and fast. With a single wire reel, the stripping and rolling of HRB335 and HRB400 grade ribbed steel with φ12-40mm can be completed at one time.

You can also choose the Gulis HGS-40D large-scale fully automatic straight thread rolling machine according to the length of the steel wire teeth processed by yourself. The large automatic straight thread rolling machine produced by Gulix has large vise, large motor (4.5-5.5KW), and heavy weight (400KG). It is suitable for large reinforcement bars of more than 32 and continuous high-strength operations.

1. The rolling machine has poor accuracy, large vibration and service under abnormal operation;

2. The alignment of the rolling die is incorrect, the axial displacement of the rolled part occurs, and the tooth pattern is subjected to two stresses: shear and compression;

3. The size of the rolled thread blank is uneven, the surface is not cleaned, and there are grinding wheel foam, oxide scale and dirt;

6. The rolling wheel must be fully demagnetized before leaving the factory. Residual magnetism is left. The fine iron foam adsorbed by the tooth pattern will accelerate wear and tear during work.